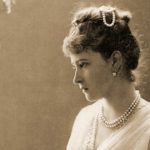 Grand Duchess Elizabeth Feodorovna was a Lutheran who married into Russian nobility and eventually converted to the Orthodox faith. When her husband was assassinated by revolutionaries in 1905 she became an Orthodox nun. In 1918 she was arrested and killed by the Bolsheviks at the start of the Russian Revolution. Elisabeth was canonized by the Russian Orthodox Church in … END_OF_DOCUMENT_TOKEN_TO_BE_REPLACED