Saint Romanos the Melodist or the Hymnographer (Greek: Ῥωμανὸς ὁ Μελωδός) was one of the greatest of Syrio-Greek hymnographers, called "the Pindar of rhythmic poetry". He flourished during the sixth century, which is considered to be the "Golden Age" of Byzantine hymnography. 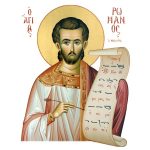 By St. Romanos the Melodist Today you have appeared to the whole world, and your light, O Lord, has made a sign upon us who, with knowledge, sing your praise, “You have come, you have appeared, the unapproachable Light.” In Galilee of the Gentiles, in the country of Zebulon and the land of Nepthali, as the prophet said, a great light has shone—Christ … END_OF_DOCUMENT_TOKEN_TO_BE_REPLACED