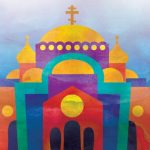 The irreducible difference between Orthodox Christianity and the Western Confessions (Roman Catholicism and Protestantism) writes Metropolitan Anthony (Khrapovitsky) is that the former understands Christianity first as ascetic effort and the latter perceives it as moral perfection. The differences are grounded in conflicting views of Christ's atoning work. Where Orthodoxy … END_OF_DOCUMENT_TOKEN_TO_BE_REPLACED