Convent of St. Thecla and the Dormition 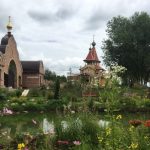 Despite the abundance of recent news on Russia, much of it false or distorted, little attention has been shown to the remarkable renaissance of Orthodox Christianity in that country. Yet during less than thirty years since the fall of the Soviet Union, the number of churches in Russia has risen from less than 500 to nearly 40,000—about four new or restored churches per day! … END_OF_DOCUMENT_TOKEN_TO_BE_REPLACED