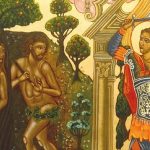 Fr John Romanides was one of the last century’s most important Orthodox theologians, and this essay anticipates many of his later formulations. He argues here that we cannot understand the remedy for sin unless we correctly understand sin itself, and to do this we must abandon the narrowly “moral” understanding of sin that has been predominant in the West, … END_OF_DOCUMENT_TOKEN_TO_BE_REPLACED