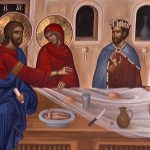 Editors Note. This essay, written by Dr. David C. Ford, Professor of Church History at St. Tikhon's Seminary, responds to a homosexual activist who argues that the Orthodox moral tradition should be retooled to sanction homosexual behavior. The arguments, while unfamiliar to some Orthodox readers, are not new. They were first used against the Episcopal Church over four decades … END_OF_DOCUMENT_TOKEN_TO_BE_REPLACED