Man sentenced God to death; by His Resurrection, He sentenced man to immortality. In return for a beating, He gives an embrace; for abuse, a blessing; for death, immortality. Man never showed so much hate for God as when he crucified Him; and God never showed more love for man than when He arose. Man even wanted to reduce God to a mortal, but God by His Resurrection made man immortal. The crucified God is Risen and has killed death. Death is no more. Immortality has surrounded man and all the world.

When a man belonging to Christ dies, he simply sets aside his body like clothing, in which he will again be vested on the day of Dread Judgment.

By sin, man became mortal and transient; by the Resurrection of the God-Man, he became immortal and perpetual. In this is the power, the might, the all-mightiness of the Resurrection of Christ. Without it, there would have been no Christianity. Of all miracles, this is the greatest miracle. All other miracles have it as their source and lead to it. From it grow faith, love, hope, prayer, and love for God. Behold: the fugitive disciples, having run away from Jesus when He died, return to Him because He is risen. Behold: the Centurion confessed Christ as the Son of God when he saw the Resurrection from the grave. Behold: all the first Christians became Christian because the Lord Jesus is risen, because death was vanquished. This is what no other faith has; this is what lifts the Lord Christ above all other gods and men; this is what, in the most undoubted manner, shows and demonstrates that Jesus Christ is the One True God and Lord in all the world.

Because of the Resurrection of Christ, because of His victory over death, men have become, continue to become, and will continue becoming Christians. The entire history of Christianity is nothing other than the history of a unique miracle, namely, the Resurrection of Christ, which is unbrokenly threaded through the hearts of Christians form one day to the next, from year to year, across the centuries, until the Dread Judgment.

Man is born, in fact, not when his mother brings him into the world, but when he comes to believe in the Risen Christ, for then he is born to life eternal, whereas a mother bears children for death, for the grave. The Resurrection of Christ is the mother of us all, all Christians, the mother of immortals. By faith in the Resurrection, man is born anew, born for eternity. “That is impossible!” says the skeptic. But you listen to what the Risen God-Man says: “All things are possible to him that believeth!” (Mark 9:23).

Faith is our victory, by which we conquer death; faith in the Risen Lord Jesus. Death, where is your sting? The sting of death is sin. The Lord “has removed the sting of death.” Death is a serpent; sin is its fangs. By sin, death puts its poison into the soul and into the body of man. The more sins a man has, the more bites, through which death puts its poison in him.

When a wasp stings a man, he uses all his strength to remove the sting. But when sin wounds him, this sting of death, what should be done? One must call upon the Risen Lord Jesus in faith and prayer, that He may remove the sting of death from the soul. He, in His great loving-kindness, will do this, for He is overflowing with mercy and love. When many wasps attack a man’s body and wound it with many stings, that man is poisoned and dies. The same happens with a man’s soul, when many sins wound it with their stings: it is poisoned and dies a death with no resurrection.

Conquering sin in himself through Christ, man overcomes death. If you have lived the day without vanquishing a single sin of yours, know that you have become deadened. Vanquish one, two, or three of your sins, and behold: you have become younger than the youth which does not age, young in immortality and eternity. Never forget that to believe in the Resurrection of the Lord Christ means to carry out a continuous fight with sins, with evil, with death.

If a man fights with sins and passions, this demonstrates that he indeed believes in the Risen Lord; if the fights with them, he fights for life eternal. If he does not fight, his faith is in vain. If man’s faith is not a fight for immortality and eternity, than tell me, what is it? If faith in Christ does not bring us to resurrection and life eternal, than what use is it to us? If Christ is not risen, that meant that neither sin nor death has been vanquished, than why believe in Christ?

For the one who by faith in the Risen Lord fights with each of his sins, there will be affirmed in him gradually the feeling that Christ is indeed risen, has indeed vanquished the sting of sin, has indeed vanquished death on all the fronts of combat. Sin gradually diminishes the soul in man, driving it into death, transforming it from immortality to mortality, from incorruption to corruption. The more the sins, the more the mortal man. If man does not feel immortality in himself, know that he is in sins, in bad thoughts, in languid feelings. Christianity is an appeal: Fight with death until the last breath, fight until a final victory has been reached. Every sin is a desertion; every passion is a retreat; every vice is a defeat.

One need not be surprised that Christians also die bodily. This is because the death of the body is sowing. The mortal body is sown, says the Apostle Paul, and it grows, and is raised in an immortal body (I Corinthians 15:42-44). The body dissolves, like a sown seed, that the Holy Spirit may quicken and perfect it. If the Lord Christ had not been risen in body, what use would it have for Him? He would not have saved the entire man. If His body did not rise, then why was He incarnate?

Why did He take on Himself flesh, if He gave it nothing of His Divinity?

If Christ is not risen, then why believe in Him? To be honest, I would never have believed in Him had He not risen and had not therefore vanquished death. Our greatest enemy was killed and we were given immortality. Without this, our world is a noisy display of revolting stupidity and despair, for neither in Heaven nor under Heaven is there a greater stupidity than this world without the Resurrection; and there is not a greater despair than this life without immortality. There is no being in a single world more miserable than man who does not believe in the resurrection of the dead. It would have been better for such a man never to have been born.

In our human world, death is the greatest torment and inhumane horror. Freedom from this torment and horror is salvation. Such a salvation was given the race of man by the Vanquisher of death – the Risen God-Man. He related to us all the mystery of salvation by His Resurrection. To be saved means to assure our body and soul of immortality and life eternal. How do we attain this? By no other way than by a theanthropic life, a new life, a life in the Risen Lord, in and by the Lord’s Resurrection.

For us Christians, our life on earth is a school in which we learn how to assure ourselves of resurrection and life eternal. For what use is this life if we cannot acquire by it life eternal? But, in order to be resurrected with the Lord Christ, man must first suffer with Him, and live His life as his own. If he does this, then on Pascha he can say with Saint Gregory the Theologian: “Yesterday I was crucified with Him, today I live with Him; yesterday I was buried with Him, today I rise with Him” (Troparion 2, Ode 3, Matins, Pascha).

Christ’s Four Gospels are summed up in only four words. They are: “Christ is Risen! Indeed He is risen!”

In each of these words is a Gospel, and in the Four Gospels is all the meaning of all God’s world, visible and invisible. When all knowledge and all the thoughts of men are concentrated in the cry of the Paschal salutation, “Christ is Risen!”, then immortal joy embraces all beings and in joy responds: “Indeed He is risen!” 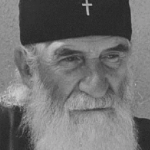 St. Justin Popovich
Our father, Archimandrite Justin Popovich  (1894-1979) was born in Serbia where he spent most of his life, although educated at the Universities of Oxford, Athens, and St Petersburg after studying with St Nikolai Velimirovich in Belgrade. He was a theologian and philosopher, a scholar and professor, a great modern ascetic, a champion of Christ and His Church against the atheistic Communist regime of Yugoslavia, and archimandrite of the Monastery Celije, near Valjevo. He was formally glorified as a saint by the Holy Synod of the Serbian Church on May2, 2010, and he is commemorated on June 1 each year.