In this simple parable, Elder Cleopa explains how events that appear random, arbitrary, and even evil may in fact serve a higher purpose.

A long time ago in the Egyptian desert there lived a hermit monk. Sometimes he would go to Alexandria to sell the baskets he wove. The hermit would give almost all the money he made on his baskets to the poor, leaving only enough to buy himself the bare necessities.

One day while walking to the city he asked himself the question, “Why does the Lord allow evil in people’s lives if He is Good, Just, and Almighty?” His mind was disturbed because he had seen so much unhappiness and sorrow when he was last in the city.

Along the road he met another monk who was also going to Alexandria. They talked with each other, and he told his new travelling companion about his anguish. Seeing that the hermit was troubled, the monk comforted him and told him that the Lord will reveal the truth to him when they arrive at the city, but he will have to pray ceaselessly and never ask questions, no matter what happens.

The hermit promised to do as the monk said, and they continued along their way. They stopped at one home to spend the night. The householders received them with love and generously fed them. On the table was a beautiful silver vessel. Before they left to go to sleep, the monk surreptitiously took that vessel and put it in his rucksack. The hermit wanted to reproach his companion, but he remembered his promise and said nothing.

In the morning they came to the river. The monk took out the vessel, made the sign of the cross over it, and put it into the river.

By lunchtime the travellers had arrived at another village. They were invited to one of the houses for a meal. When they were leaving the house, a dog was barking in the yard. The monk killed it. Immediately a boy ran out of the house and started screaming. The hermit’s travelling companion grabbed him by the right arm, yanked it and broke it, then calmly continued his way. The indignant hermit wanted to tell him what he thought, but remembering his promise he again kept silence.

When dusk fell, the monk and the hermit decided to spend the night in a ramshackle house, which turned out to be inhabited by some children. Their parents had died and they had no one to take care of them. The travellers spent the night there, but in the morning before leaving the monk took a firebrand out of the furnace and burned down the house. And again the hermit was indignant, but again he could say nothing.

They came to a third village. There they saw a ruined church, but it was still possible to go into it and pray. The monk took up a stone and flung it through the church window, shattering it. Then he took his bemused brother to a tavern. When he entered, the monk made three prostrations. The hermit by now had resigned himself to his companion’s strange behavior and just prayed.

On the last night the travellers were invited to spend the night in a house on the edge of a wood. There lived a young couple who had no children. In the morning the couple set out to work in the field, and the travellers went on their way. But suddenly the monk returned and burned down that house as well.

Finally they arrived at Alexandria. The hermit could no longer wait to understand the essence of what had happened to them on the road. So he asked his companion, “Tell me after all, who are you?”

“I am an angel,” the other replied.

“You! An angel?!” the hermit scoffed disdainfully. “You are a real devil! Only a demon could do all those dreadful things you’ve done. Those good people showed you hospitality you repaid them all with black ingratitude. You were a thief, an arsonist, a murderer, and a sacrilegious desecrator. And you even wear monastic clothing!”

“You are mistaken,” the travelling companion answered. “I really am an angel. And I was sent to you because the Lord saw your anguish and wanted to answer the questions that tormented you. I know that you want to know why I did all those things. I will start from the beginning.

“Why did I steal the vessel? I’ll answer you. Our host’s grandfather stole it from one monastery church, and because of that sacrilege his family was punished for three generations with illnesses and other problems. As a sign of gratitude for their hospitality I decided to deliver them from this punishment. I signed the vessel with the sign of the cross and put it into the river. Some monks will come there to wash their clothes, find it and return it to the monastery.

“I knew that the dog was already rabid. It would have bitten its owners and that is why I killed it. And I broke their son’s arm because I could foresee that when he grows up he would become a robber. But with a bad arm like that you can’t do much robbing.

“Why did I burn down the children’s house? Those children would soon have died without any care, and now in the place of their burned house they’ll find the silver their parents hid, and they can now go to Alexandria to their grandfather who is a bishop —- he’ll take care of them. When they grow up, the boys will become priests and the girls will marry.

“I know that you are puzzled as to why I threw the stone through the church window and made prostrations in the tavern. I saw that the demons were dancing at the church window and I chased them away with that stone. That church will soon be repaired. In the tavern was a wealthy merchant who had promised the priest that he would pay the cost of repairing the church. That is why I bowed to him.

“And finally, about the last house. I burned it down in order to save the young couple from the curse of childlessness. The husband had made a dirty deal and built that house with the money he got from it. That is why they didn’t have any children. I saw that he is repenting of his deed and doesn’t know how to get rid of his house. Now he will build a more modest house but on honestly earned money. And the Lord will bless them with children.”

Do you understand? God’s mercy for people is shown in everything, but they don’t see it and can’t understand it. The Lord never commits evil. But people look at His works as misfortunes and sorrows, while the Lord does these things only for the sake of good and for their correction. Therefore do not look at the external side, but try to see God’s all-encompassing justice in everything.

Translated from the Russian version by Nun Cornelia (Rees) 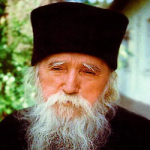 Elder Cleopa of Romania
Father Cleopa Ilie (1912 – 1998) was an abbot of the Sihastria Monastery. Schooled in “the university of obedience and silence,” much of Elder Cleopa’s spiritual formation took place in the forests and mountains of Moldavia, herding sheep for more than a decade as a young monk, and later taking refuge in the wilderness following each of the three times he was arrested by the communist government. He is widely recognized as one of the great spiritual teachers of twentieth century Romania.