By Metropolitan Anthony (Bloom) of Sourozh

In the Name of the Father, the Son and the Holy Ghost.

We are at the threshold of Holy Week, but on this threshold, we are filled with a great and joyful hope by the raising of Lazarus. The Lord is stronger than death, the Lord has overcome it; not only in the obvious sense in which it is manifested in the bodily raising of Lazarus, but in another sense which concerns us from day to day even more directly. God created man as a friend for himself, and this friendship is made closer and deeper by our baptism. Each one of us is a friend of God, as Lazarus was called, and in each one of us this friend of God once lived; lived by his friendship with God, lived by the hope that this friendship would become deeper, stronger, brighter. Sometimes this was in our early childhood, sometimes later, in our youth, but in each of us this friend of Christ lived. And then in the process of living, as a flower fades, as the forces of life, hope, joy, purity dwindle, so the strength of the Lord’s friend dwindles, and many a time we feel as though he is lying as in a coffin somewhere inside us. We cannot even say that he is resting, we have to say that the friend of the Lord is lying four days dead, stricken by a horrible death, whose coffin his sisters are afraid to approach because his body is already decomposing. Often our soul grieves over this friend, often Martha and Mary grieve over him; that side of the soul which by its vocation, in strength and abilities is, like Mary, capable of contemplation, of sitting in silence at the feet of the Lord, listening to every life-giving word and becoming alive and tremulous; and the other side, which could be like Martha capable of doing God’s work with inspiration, in truth and purity, could be, not a worried servant — but capable of transforming the most ordinary things by her love and care into the Kingdom of God, the manifestation of human and divine love. And so these two elements in us, the Mary and the Martha, the contemplative and the creative powers grieve over the death of Lazarus, the friend of the Lord.

At certain moments the Lord comes near to us, and when we see him we are ready to exclaim with Martha “Lord, why were You not here when the struggle between life and death was being resolved, the moment when Lazarus was still alive though mortally wounded and could have been retained in this life. If you had been here he would not have died.” But the Lord was here, He was here all the time when our soul was dying, and we heard his words “Do you believe that he will rise again?” With Martha we are ready to answer: “Yes, Lord, on the last day.’ But Martha spoke with such hope. She said: “I always have believed, that you are the Lord and I believe that he will rise again on the Last Day”. Whereas we gloomily agree that on the Last Day he will rise again — but only when, as the Great Canon puts it, the Feast of Life is over and it will be too late to achieve anything on earth, too late to live in faith and hope and the joy of ever-increasing love. But the Lord gives the same answer to our hopelessness as He did to her perfect hope: “I am the Resurrection and the Life, He that believes in me, though he were dead, yet shall he live.”

There is a further point. Martha did not know at that time that a few days previously Christ had told His disciples that Lazarus was sick unto death, did not know that He allowed him to die in order that he might rise again enriched with such experience so filled with the victory of God that nothing could ever shake him and so the Lord came and commanded Lazarus to rise from the dead.

Here is the image for us: in each of us Lazarus is lying dead, vanquished surrounded by our often hopeless grieving. But the Gospel reading just before the days of the Passion has this message: “Do not fear, I am the Resurrection and the Life. The Lord’s friend that is in you whom you consider irrevocably dead can rise again at a single word of mine, and indeed will rise again.” So let us enter the days of the Passion with the hope, with the certainty that we are going towards the transition from the temporary to the eternal, from death to life, from our defeat to the victory of God. Let us enter these days of the Passion with trepidation at the knowledge of how much the Lord loves us and at what cost He gives us life. Let us enter with hope and light in our hearts, and joy in the coming resurrection. 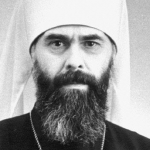 Metropolitan Anthony Bloom
His Eminence Metropolitan Anthony Bloom (June 6, 1914—August 4, 2003) was bishop of the Diocese of Sourozh, the Russian Orthodox Church in Great Britain and Ireland. Born to a distinguished Russian family, he spent his early years in Russia and in Persia, where his father was a diplomat, and after 1923 in Paris, where he went on to study the sciences and take a doctorate in medicine at the University of Paris. Serving on the front as a surgeon in the French Army, he was tonsured as a monk in 1943 and was ordained as a priest in 1948, after which he served as chaplain, priest, and hierarch in England. His written works are widely read in both Russia and the West, and is regarded by many to have been a Saint of the Church.