In this moving account, Archpriest Nikolai Agafono narrates how a foolish childhood escapade led his family into Orthodox Christianity, despite their dismissive view of religion that exemplified attitudes imposed by the Soviet state. As the details emerge, he skillfully reveals how God’s love can permeate even the most rigid ideological filters that modern secularism is able to enforce.

Once, when I was already a writer, I got into a conversation with my mom. She told me that when she was pregnant with me, she had an irresistible desire to read. Throughout the whole pregnancy she avidly read, read, and read everything: Russian, world, and contemporary literature. Hence, I was born a bookworm. I asked her then what she was doing when she was pregnant with my sister.

Mom laughed, “You will not believe it. I passionately wanted to sew and embroider, so I did exactly that until your little sister was born”. And here it was: my sister Muza became a wonderful tailoress and even established a school of pictorial embroidery in Volgograd, and then took up embroidering icons. I am very grateful to my mother for starting our education inside her womb. In fact, before long, it was literature that through a series of amazing, funny, and sad events led my mother and me to God.

We were a simple Soviet family that lived in Togliatti. Like most people of that time, we were far away from the Church. Of course, my parents were not militant atheists, Church’s life for them was simply somewhere in a parallel universe unrelated to our everyday life. I was growing up with a firm conviction that believers were just illiterate people, mostly the elderly, who believe in God and various miracles due to their ignorance. We were indoctrinated with that at school as at that time the teacher’s word was inviolable. However, lucky for me, as I have said before, books played a big part in my life.

When I was twelve, I was especially addicted to reading adventure fiction. Jules Verne’s “Dick Sand, A Captain at Fifteen”, the characters in Stevenson, Mayne Reid, and James Fenimore Cooper’s books: they were the ones who excited my childish imagination and made me dream of journeys and adventures. I made a desperate move: I decided to start on a journey right away without awaiting adulthood. I do not know why I did not think then of how much pain I would bring to my mother with this act. Having saved some bread crumbs and money that my mom gave me for school lunches, I went on an adventure. I told my little sister to tell mom not to worry and that I would write them all a letter, when I arrived in America.

I will not tell about my misadventures, as a result of which I got into juvenile reception center. I will tell about my mom. She came home from work, made dinner, and asked my little sister to run outside and take me home. She admitted to her that I ran away from home to travel to America. Having understood nothing from these ridiculous explanations, my worried mother ran to look for me at the neighbors’. Then she looked in on all relatives and friends. After failing to find me anywhere she woke all the teachers up, wrote down all my classmates’ home addresses and visited them all. She was looking for me all night long and reported to the police. All that was to no avail. She fell sick in the morning and could not go to work. Day after day passed, and I was not found.

A week went by, my mom thought in despair, “Since people can not help me, there is still the last hope”. Thanks to my unreasonable act my mother consciously crossed the church’s threshold for the first time. There she saw an icon of the Mother of God and fell before Her on her knees. Without knowing any prayers, she said to the Holy Theotokos, “Holy Mother, You also suffered when Your Son was crucified, therefore only You can understand a mother’s heart. Help me get my son back. Make sure that he does not end up with bad people. That he stays alive and healthy. Bring him to senses and save him”. She cried and prayed until the church’s closing. When she returned home, an unexpected joy was waiting for her: a telegram. It said that she could pick me up at such an address in the city of Kuibyshev. Mother immediately rushed to the bus station and caught the last intercity bus.

I never forgot that night. I was sleeping, and I had a bad dream. I was running away and hiding from someone, and raindrops were falling on my face all the time. I could not avoid these raindrops, so I woke up. My dear and beloved mom’s face was bent over me. She was afraid to wake me up and silently admired her sleeping son who she had not hoped to see alive. I threw myself into my mother’s arms asking for her forgiveness and promising to never run away from home.

It was the all merciful Divine Providence that led my foolish act to good, having prompted my mother to pray.

Since then, something has started happening to me. In the books I read I began to notice special signs that made me think about questions of faith. I was shocked that in Leo Tolstoy’s “Childhood” its character, a little boy, prays “for Papa and Mamma”. In Daniel Defoe’s “Robinson Crusoe” I was surprised to find that reading the Bible helps Robinson to survive alone. I was amazed how different were the volume of Anderson’s fairytales of the pre-revolutionary edition, which I accidentally came across, and the author’s tales that I had read earlier of the Soviet edition. I noticed that Gerda overcomes the Snow Queen’s evil spell with a prayer, and the magic mirror was broken not because demons lifted it higher and higher into the sky, but because they wanted to laugh at the Creator Himself and His angels. So much more that I learned from books began to shake my atheistic beliefs.

The final enlightenment happened thanks to the reading of Leo Tolstoy’s novel “War and Peace”. We were asked at school to read some specific chapters at home. I confess, I was too lazy to read the whole novel, and I paid more attention to the battle scenes. However, one day something prompted me to open the novel on the page where the Countess of Rostov, Natasha’s mother, says an evening prayer. Lev Nikolaevich puts in her mouth the initial words of the Saint John Damascene’s prayer, which is read at bedtime, “O Master, Lover of mankind, is this bed to be my coffin…” Even though it was in Church Slavonic, I perfectly understood what it was all about and I realized with a chill that our bed that we sleep in every night will be our deathbed someday. What then? My body will be taken to the cemetery and buried as if there was no life during which I rejoiced and suffered, loved and created. After all, along with my decomposing body, my own memory will disappear. Whether I lived or not, it does not matter. Well, others will remember you for a while, but it is their memory, their life that will also end in the grave. The thought of the human life’s meaninglessness horrified me.

Troubled with this discovery, I asked the teacher the next day at school, “What does a person live for if they still die in the end and the whole world disappears for them as if they did not exist?” The teacher initially tried to answer along the lines of the official ideology saying that a person lives for the benefit of future generations, who will live under communism. I do not remember how I objected, but I made it clear that I do not wish to be just manure fertilizing the lives of hazy future generations, who will also be mortal. The teacher did not argue with me, but simply said, “Okay, I will explain the meaning of life to you as I understand it. You will become an adult, you will meet a girl, you will love each other, then marry, and have children. These children will be the meaning of life”. “So, – I started saying out loud, – my mom’s meaning of life is me, my grandmother’s is my mother, mine is my children, and my children’s is their children, who will die after their parents in some 25-30 years. Why is the life meaning in those who will disappear from this world right after you? What if I do not have children, for example, am I a meaningless being then?” The teacher could not find anything to say, she simply advised me not to think about it and to live like everyone else.

However, I could not live like everyone else anymore. I started to think about a soul more and more. The soul that cannot be subjected to corruption, therefore, the one that is immortal. My thoughts developed in the same way as in the poem that Yevgeny Yevtushenko is credited with, although truly it belongs to Ilya Fanyaev:

I have never known priests in the world,
I have never studied prayers.
But answer, if there is no soul
Then what is hurting me like daggers?

This is how I began my search for God that ended with my admission to the Moscow Theological Seminary and my going into the ministry later on. 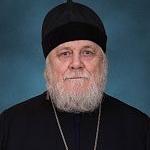