It belongs to the inner genius of the Orthodox faith, corresponding to the Incarnational entry of God Himself into a particular time and place on earth, to embrace the particularities of the places in which it is practiced. A fine example of this is the use of pussy willow branches on Palm Sunday in Slavic lands where palms are not traditionally available. And as Orthodoxy becomes rooted in areas far from its Mediterranean homelands, it is important to keep seeking ways to articulate the eternal truths of faith in the languages and imagery of these new lands. This essay by Monica Ibrahim — introduced by her priest, Fr Doru Costache, himself a native Romanian — discusses an Australian bush that has special radiance during the Nativity Feast, and is thus exemplary in showing the possibilities of this task.

Following a conversation I recently had with Professor Bruce Seraphim Foltz, it is my pleasure to introduce an essay by Mrs. Monica Ibrahim, who kindly gave permission for its republication on Another City. She is a member of Saint Gregory the Theologian Orthodox Mission in Mona Vale, New South Wales, Australia. Functioning under the jurisdiction of the Romanian Orthodox Church, the mission was established in July 2017 and I am its founding priest.

The membership of our mission is ethnically diverse, our common denominator being the Orthodox way and the use of English in the liturgy. But it is not unusual for our conversations to address a certain challenge posed to Orthodox Christians living in Australia today. It has become obvious to us that it is not sufficient to procure and produce better English translations of the services, although this is undoubtedly a step in the right direction. Our world Down Under differs from the northern hemisphere. For example, in Australia Easter is an autumn festival and Christmas falls in summer. Seasonal references to spring during Lent (a word which in old English means “springtime”) and the Paschal season, or the seasonally resonant remembrance of Saint George for that matter, are dissonant in the southern hemisphere. Likewise, references to plants, animals, and landscapes from the northern hemisphere are foreign to Australia.

Monica is passionately interested in discovering the natural and cultural landmarks of our Antipodean homeland, seeking ways to indigenize the Orthodox experience. Overall, her views correspond to those of our community and her research has my full support. The task she took upon herself is to discover symbolically charged features within the Australian environment to which we could refer in sermons, depict in iconography, and include in Orthodox hymnography. Some may look at this enterprise with suspicion. However, once we stopped using incomprehensible languages and began to read or chant in English, liturgical passages that evoke alien places and imagery began to make us feel somewhat displaced and inadequate.

But Monica’s undertaking and our own is not foreign to the Orthodox mindset at all. The interpretation of Genesis in early Christian patristic texts refers to various landscapes, fauna, and flora. It would suffice to compare the Hexaemeron treatises of Saint Basil and Saint Ambrose from this viewpoint; the result is illuminating, since both Fathers contemplated their respective environments. Likewise, the Byzantine hymns still in the use of the Orthodox Church throughout the world continued the indigenization by referring to landscapes, flora, and fauna with which the Byzantines were familiar. Against the backdrop of the tradition, therefore, Monica searches for elements that can contribute to a corresponding indigenization of the Orthodox message to Australia. The essay reproduced below, initially published in 15 November 2018 on the Facebook page of the mission, illustrates this effort.

The Christmas Bush and the Mystery of Christmas Australian Natural Contemplation The Syriac fathers often used symbols from the natural world to explain a spiritual reality or truth. Saint Ephrem’s explanation of the Trinity by way of the analogy of the sun and its elements is an excellent example. If we pay close attention to the environment we also notice pointers to the mystery of the Lord’s Nativity. The native New South Wales Christmas Bush (Ceratopetalum gummiferum), commonly found in gardens around Sydney, is one such pointer. It is a small tree renowned for its cluster of distinctive five-petal red flowers that emerge around Christmas time. The tree begins to flower in the Australian mid-spring, during the month of October. The mass of tiny white flowers forms a stunning bright canopy around the plant. By the middle of November, as the warmer summer months approach, deep pink to bright red sepals that protect the flower bud emerge and take over the plant. The white flowers shrivel and form a small nut inside the changing red sepals. The more exposed the tree is to the sunlight, the greater the intensity of the red colored sepals. By December, the mass cluster of red flowers adorn the tree into a red crimson color. The leaves of the tree are also comprised of three leaflets, that sit on a long-grooved stalk.

As Saint Ephrem would see it, for most of the year the trifoliate leaves of this plant bear witness to one God in Trinity. The cluster of white star flowers that emerge in October point to the star that has already set the three wise men on their journey. In the middle of November, the shriveling of the white flower to form a nut encircled by the red sepals points to the Uncontainable One being carried in the Virgin womb that has become “more spacious than the heavens.” Mystically perceived, the transformation of the flowers from white to red signifies God’s becoming human so that we can become adopted gods. The five petals foreshadow the five wounds on the Cross that will restore us to the image that we lost. Finally, the fiery red tree that in December spectacularly stands out in the Australian landscape announces that the Tree of Life that was hidden will once again be revealed—and that we will be able to eat of its divine fruit.

Let us pay attention to the Christmas Bush, which like the angels announces the coming Nativity, calling us to prepare our hearts to receive the Divine Child. Let us heed the hymn that announces the festival, translating in imperishable words the message likewise conveyed by the Australian Christmas Bush:

Prepare O Bethlehem
For Eden has been opened to all
Adorn yourself, O Ephratha
For the Tree of Life blossoms forth from the Virgin in the cave
Her womb is a spiritual paradise
Planted with the fruit divine
If we eat of it we will live forever
And not like Adam
Christ is coming to restore the image which he made in the beginning! 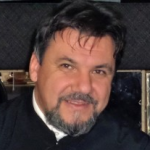 Protopresbyter Dr. Doru Costache was trained at the Radu Voda Seminary, Bucharest, Romania (1983-1988). He has undertaken undergraduate studies (1989-1993) and doctoral studies (1995-1999) in Orthodox theology at the University of Bucharest. His doctoral thesis, publicly defended in March 2000, was on the anthropic cosmological principle interpreted from the viewpoint of a patristic theologian, Saint Maximus the Confessor, and a neopatristic theologian, Father Dumitru Staniloae.