As Fr. Seraphim Rose once wrote, the difference between Orthodoxy and heterodoxy is most apparent in that the Orthodox Church (in Her Saints) is able to discern the spirits. Moreover, discernment of the methods of the fallen spirits is a requirement in the formation of Christology and Ecclesiology. As the Evangelist John writes, “For this purpose the Son of God was manifested, that he might destroy the works of the devil” (1 John 3:8).

Insomuch, therefore, as one is purified from the passions and illumined by the Spirit of God, so much is his spiritual vision open and discernment acquired. This gift of discernment, the greatest of the virtues, presupposes initiation into the death, resurrection and life in Christ which is lived within His Body, the Church. That few Orthodox Christians possess a good measure of this gift is a testament to the inroads of the spirit of anti-Christ, which, by another name, is secularism. The end of the worldly spirit is the denial of the theanthropic nature of the Christ and His Body, “the hour of temptation, which shall come upon all the world, to try them that dwell upon the earth” before the ascent of the man of iniquity, the Antichrist. This temptation is coming upon the world primarily through the spread of the ecclesiological heresy known as ecumenism.

Ecumenism as an ecclesiological heresy and denial of the Truth of the Body of Christ, and as a methodological distortion of The Way of Christ, has been born and bred within a secularized “Christianity.” As we said, secularism is first and foremost the spirit of antichrist, which is “already in the world,” namely, “every spirit which confesseth not that Jesus Christ is come in the flesh.” This refers not only to that “Christianity” which expressly denies the divinity of our Lord, the various contemporary “Arianisms,” but every spirit which denies that the Jesus Christ is come – that is, has come and remains – in the flesh, in His Body, the One Church.

Ecumenism as a unification movement ironically seeks to overcome the scandal of division by denying the “scandal of the particular” – the Incarnation. Instead of crucifying their intellect on the cross of this scandal – that Christ entered and continues within history in a particular time and place, being mysteriologically-incarnationally ‘here’ and not ‘there’ – the uninitiated and rationalist followers of Jesus seek a theanthropic Body in their image: “divided in time,” in search of a fullness which they imply exists only on the heavenly plane. They see the Church as divided on the historical plane, as limited by the heavy hand of history. They see as Church identifiers not primarily the exclusive marks of oneness, holiness, catholicity and apostolicity taken together, but rather the externals which “already unite,” such as the water of baptism (whether sprinkled, poured or immersed), the rites of the Liturgy, the belief in Christ’s divinity or the common text of Holy Scripture. It matters little that such externals, and indeed much more, were possessed by ancient heretics such as the Monophysites or Iconoclasts and were never seen as sufficient to produce any sort of “partial communion” or “already existing unity.” Neither does it seem to faze them that “the demons believe and tremble” and thus “unity in belief in Christ’s divinity” would necessarily include the demons.

This new ecclesiology, this new vision of the Church, or, rather, of Christ Himself as Head and Body, might be characterized as ecclesiological Nestorianism, in which the Church is divided into two separate beings: on the one hand the Church in heaven, outside of time, alone true and whole, and on the other hand, the Church, or rather “churches,” on earth, in time, deficient and relative, lost in history’s shadows, seeking to draw near to one another and to that transcendent perfection, as much as is possible in the weakness of the impermanent human will.

They apparently don’t realize, however, that in denying the manifest Oneness of Christ in a particular time and place on earth, in the One, Holy, Catholic and Apostolic Church, they are also denying He is come in the flesh. They seek to forge a Church from disparate elements or recognize an already existing but “divided” Church in place of the One Church, a body in place of the God-man’s Body which is come, and in this reveal they are of the spirit of antichrist (lit. that which is put in place of Christ).

Strangely, what is often seen as opposed to ecumenism, or even the heresy ecumenism is meant to correct, Phyletism, is a kindred spirit with ecumenism and born and bred within the same spiritual milieu: secularism.

As with the heresy of ecumenism, the phyletist sees the Church as limited by and within history, as identified not firstly or as much by the exclusive marks of oneness, holiness, catholicity and apostolicity as by one’s ethnic identity and its past. The aim of the Church here is not the salvation of all men from sin and death but the salvation of their ethnic identity and nation. With phyletism, as with ecumenism, the hierarchy is lost, discernment misplaced or non-existent, as to what is first and what follows in terms of our identity, with the secondary and tertiary taking the lead.

Phyletism was the necessary precursor to ecumenism, the pendulum swung to the right so that momentum could be built up for the great swing to the left and the ensuing apostasy. It was necessary also that a straw man be created in place of Patristic Orthodox ecclesiology so that legitimate opposition to the new ecclesiology could be easily marginalized and lumped together with the various “isms” on the right. Ecumenism is supposed to come as a corrective to phyletism, but paradoxically it can be, and often is, reconciled “peacefully” with phyletism.

For example, when one views his church as essentially identified with his tribe he readily accepts that his neighbor’s tribe must also have a national church (to the worldly minded it matters not whether it is “fully” orthodox or “partially” heterodox). Only in this context can one make sense of such phenomena in the West as the immigrant who sees no problem with his own children going to the local heterodox community since they have “become Americans” and go to the “American church.” Only when one understands that the phyletists identify the Theanthropic Body of Christ with their language and their culture can he begin to grasp why they prefer to lose their very own children and let their parish die with them, rather than change one iota of these transitory aspects (Matt. 24:35).

Ecumenism and Phyletism: Two Sides of the Same Coin of Secularism

Far from being enemies or correctives of each other, ecumenism and phyletism are rather two sides of the same coin of secularism. Both deny the catholicity of the One Church and both seek to recognize in its place a “divided” Church, whether it be along ethnic or denominational lines. Both reduce the Church to the sociological and historical level, placing it at the service of the fallen world as opposed to the service of man’s salvation from, and the overcoming of, the world, according to the words of the Lord: “[B]e of good cheer; I have overcome the world” (Jn. 16:33).

The greatest proof, however, that ecumenism and phyletism are possessed of the “spirit of antichrist” lies in their fruits. They work against the salvation of the world because they make the Church into the world, “thenceforth good for nothing, but to be cast out, and to be trodden under foot of men” (Mat. 5:13). On the one hand, whether through tribalism or relativism, they deny the divine-humanity of the One Church, Her otherworldliness, Her power of the Cross (asceticism) which, if She “be lifted up” by it, draws all men toward Christ (Jn. 12:32). On the other hand, lacking the “magnet” of holiness and the theanthropic virtues, these two children of secularism deny to the heterodox the salvific “pricking” of the soul, what the Holy Elder Paisios of Mt. Athos called the “good uneasiness.” Speaking much of love, each in their own way (for nation or world), both are revealed as bereft of love for his neighbor’s salvation, for both leave him in his delusion and error, the one by erecting an ethnic roadblock, the other by denying him the narrow path. 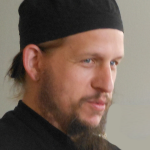