Editor’s Note: In May of 1923, one Mr. Coulton of the American Red Cross met with Florensky in Moscow. Florensky gave him an article, which does not seem to have been published in the original Russian, but only in the English translation below, prepared by Coulton and published in vol. 4, no. 4 (1924) of The Pilgrim, edited by William Temple, the future Archbishop of Canterbury. A “slightly adjusted” version of that translation was published by Robert Bird in 1995 in a small monograph called Culture and Christian Unity. The following version preserves the original translation, but omits a second part of the essay that is of lesser relevance to contemporary concerns. The portion below, in contrast, addresses Russian issues of the time in a way that seems prescient in its bearing on the situation of Christian culture in Western Europe and North America.

The editors of Another City are delighted, in this and future issues, to help contemporary audiences discover the writings of perhaps the most brilliant Orthodox philosopher of the century, whose thought was suppressed in Russia and until recently woefully slandered and ignored in the West. 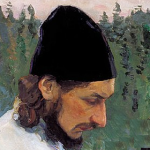