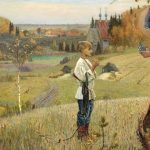 Why do Orthodox memorial litanies melodically reiterate "memory eternal” with such feeling and such energy? And why did Orthodoxy’s greatest novelist end his last great work so triumphantly with these same words? By going very deeply into a single passage in Dostoevsky’s masterpiece, "The Brothers Karamazov," Donald Sheehan leads us not only into the the center of the novel, … END_OF_DOCUMENT_TOKEN_TO_BE_REPLACED