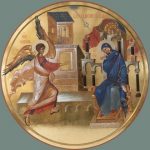 For the Virgin was not like the earth, which contributed to the creation of man but did not bring it about, for it merely offered itself as matter to the Creator and was only acted upon and did not do anything. But those things which drew the Artificer Himself to earth and which moved His creative hand did she provide from within herself, being the author thereof. What were … END_OF_DOCUMENT_TOKEN_TO_BE_REPLACED