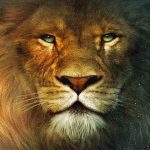 In this enchanting tale, Fr Stephen takes us back to his Fishtown neighborhood in Philadelphia, where Kusheri’s and Fr Naum’s fantasy of soaring in the summer sky over the Jersey Shore is interrupted by a young couple in love and the recollection of childhood questions about the relation of God, man, and animals — about the relation of the childlike and the … END_OF_DOCUMENT_TOKEN_TO_BE_REPLACED 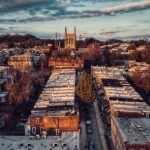 We tried to get his old shoes and coat ta’ throw ‘em in the trash. Carol said not even the rummage sale at Front and Girard would take his worn-down shoes and screen-thin overcoat. He stuffed ‘em in his paper shopping-bag suitcase he carted all his bishop stuff around in and said he knew somebody who needed ‘em. He never varied from living the life of a … END_OF_DOCUMENT_TOKEN_TO_BE_REPLACED 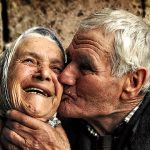 One is the asceticism of the monastic who forsakes all for the Kingdom. The other is the asceticism of the married, the widowed, and the single person who live in the day to day world and actively seek the Kingdom by embracing the Eucharistic heartbeat of creation and so find their being in in the life and the suffering of the other. By Fr. Stephen Siniari Magdalena … END_OF_DOCUMENT_TOKEN_TO_BE_REPLACED 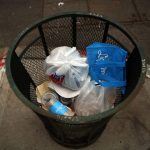 The Leo Ray Miller he had sown that night at the reception sprouted and spread like an ugly weed. It grew up through the cracks of whatever lies he told himself. It choked every intention, it poisoned every relationship and turned every so-called good deed into a self-serving con. He wanted to believe. There had to be some relief beyond his short-term capacity to fool himself. … END_OF_DOCUMENT_TOKEN_TO_BE_REPLACED 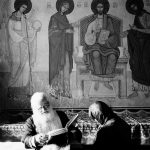 Fr. Stephen Siniari A man came to the parish. He remained in the back. Candles were burning. Vesperal prayers were rising with the incense. People had baked the Holy Bread. Three loaves were sitting on a table near the iconostasis in the front. The faithful were following the priest, making the Trisagion prostrations and kneeling for the Lord’s Prayer. Together they … END_OF_DOCUMENT_TOKEN_TO_BE_REPLACED