Remember, Christian soul, that the ascent to heaven is indispensable for anyone who wishes to save his soul unto eternity. Our Lord Jesus Christ said: “Strive to enter in through the narrow gate.” That is, the Christian ought to be an ascetic. Not only the monastic, but every Christian.

But if while ascending this ladder of spiritual perfection by struggles and ascetic labors, we cease from this work and ascetic toil, our soul will not remain in its former condition. Like the stone, it will fall to the earth. More and more quickly will it drop until, finally, if we do not come to our senses, it will cast us down into the very abyss of Hell. Unless we continually employ our efforts in correcting ourselves and our lives, we shall cease our ascent, and, most assuredly, we shall begin to fall.

More than once, brethren, the fact has been mentioned that on each Sunday in the Great Fast (i.e., Lent) there are other commemorations besides that of the Resurrection. Thus, on this day, the Church glorifies the righteous John of the Ladder, one of the greatest ascetics, which the Church, in speaking of them, calls “earthly angels and Heavenly men.”

These great ascetics were extraordinary people. They commanded the elements; wild beasts willingly and readily obeyed them. For them, there were no maladies they could not cure. They walked on the waters as on dry land; all the elements of the world were subject to them, because they lived in God and had the power of grace to overcome the laws of terrestrial nature. One such ascetic was St. John of the Ladder.

He was surnamed “of the Ladder” (Climacus) because he wrote an immortal work, the “Ladder of Divine Ascent.” In this work, we see how, by means of thirty steps, the Christian gradually ascends from below to the heights of supreme spiritual perfection. We see how one virtue leads to another, as a man rises higher and higher and finally attains to that height where there abides the crown of the virtues, which is called “Christian love.”

Saint John wrote his immortal work especially for the monastics, but in the past his “Ladder” was always favorite reading in Russia for anyone zealous to live piously, though he were not a monk. Therein the Saint clearly demonstrates how a man passes from one step to the next.

Remember, Christian soul, that this ascent on high is indispensable for anyone who wishes to save his soul unto eternity.

When we throw a stone up, it ascends until the moment when the propelling force ceases to be effectual. So long as this force acts, the stone travels higher and higher in its ascent, overcoming the force of the earth’s gravity. But when this force is spent and ceases to act, then, as you know, the stone does not remain suspended in the air. Immediately, it begins to fall, and the further it falls the greater the speed of its fall. This, solely according to the physical laws of terrestrial gravity.

So it is also in the spiritual life. As a Christian gradually ascends, the force of spiritual and ascetical labors lifts him on high. Our Lord Jesus Christ said: “Strive to enter in through the narrow gate.” That is, the Christian ought to be an ascetic. Not only the monastic, but every Christian. He must take pains for his soul and his life. He must direct his life on the Christian path, and purge his soul of all filth and impurity.

Now, if the Christian, who is ascending upon this ladder of spiritual perfection by his struggles and ascetic labors, ceases from this work and ascetic toil, his soul will not remain in its former condition; but, like the stone, it will fall to the earth. More and more quickly will it drop until, finally, if the man does not come to his senses, it will cast him down into the very abyss of Hell.

It is necessary to remember this. People forget that the path of Christianity is indeed an ascetical labor. Last Sunday, we heard how the Lord said: “He that would come after Me, let him take up his cross, deny himself, and follow Me.” The Lord said this with the greatest emphasis. Therefore, the Christian must be one who takes up his cross, and his life, likewise, must be an ascetic labor of bearing that cross. Whatever the outward circumstance of his life, be he monk or layman, it is of no consequence. In either case, if he does not force himself to mount upwards, then, of a certainty, he will fall lower and lower.

And in this regard, alas, people have confused thoughts. For example, a clergyman drops by a home during a fast. Cordially and thoughtfully, they offer him fast food (i.e., food prepared according to the rules of the Fast), and say: “For you, fast food, of course!” To this, one of our hierarchs customarily replies: “Yes, I am Orthodox. But who gave you permission not to keep the fasts?” All the fasts of the Church, all the ordinances, are mandatory for every Orthodox person. Speaking of monastics, such ascetics as St. John of the Ladder and those like him fasted much more rigorously than the Church prescribes; but this was a matter of their spiritual ardor, an instance of their personal ascetic labor. This the Church does not require of everyone, because it is not in accord with everyone’s strength. But the Church DOES require of every Orthodox the keeping of those fasts which She has established.

Oftentimes have I quoted the words of Saint Seraphim, and once again shall I mention them. Once there came to him a mother who was concerned about how she might arrange the best possible marriage for her young daughter. When she came to Saint Seraphim for advice, he said to her: “Before all else, ensure that he, whom your daughter chooses as her companion for life, keeps the fasts. If he does not, then he is not a Christian, whatever he may consider himself to be.” You see how the greatest saint of the Russian Church, Saint Seraphim of Sarov, a man who, better than we, knew what Orthodoxy is, spoke concerning the fasts?

Let us remember this. Saint John Climacus has described the ladder of spiritual ascent: then let us not forget that each Christian must ascend thereon. The great ascetics ascended like swiftly-flying eagles; we scarcely ascend at all. Nonetheless, let us not forget that, unless we employ our efforts in correcting ourselves and our lives, we shall cease our ascent, and, most assuredly, we shall begin to fall. Amen. 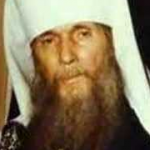 Metropolitan Philaret
Metropolitan Philaret (Voznesensky) of Moscow (1903—1985) of New York was born in Kursk, Russia, but spent much of his youth in Siberia and (beginning in 1920) Harbin, Manchuria. As an archimandrite, he championed Orthodox believers in Manchuria against the Soviets, and narrowly escaped (with serious injuries) being burned alive in his monastic cell. After a perilous escape via Hong Kong and Brisbane, he went on to serve as Metropolitan of the Russian Orthodox Church Outside Russia from 1964 until his death in 1985. His relics reside in a vault beneath the alter of Holy Trinity Cathedral, and his tomb was opened, his relics were found to be incorrupt.