Archpriest Artemy Vladimirov speaks on the spiritual meaning of the Feast of the Transfiguration of the Lord, on our ascent following after Christ, about the event of the feast and about why namely Moses and Elijah appeared to the Savior, and about how to prepare ourselves for the feast and how to pass the day.

“Thou wast transfigured on the mountain, O Christ God…” Who does not remember the opening words to the troparion of this feast, among the Great Twelve, of the Transfiguration of the Lord? Then upon Mt. Tabor the Savior, yet in the deep of night, accomplished this ascent with the three most devoted and diligent of His disciples—John—the apostle of love, his brother James and the impetuous Peter—and conversed with the Heavenly Father, while the disciples, having slumbered, suddenly saw the unfathomable: how the countenance of Christ radiated brighter than the light of the sun, and His garments became white as snow, transcending even the purity of the snow lying upon Mt. Carmel. And no launderer on earth, notes the Evangelist, can whiten fabric such as was the pure garment of Christ (cf. Mark 9:3). The disciples, when by the will of God their spiritual vision was unfurled, saw the glory of the Lord which the Son always possessed as did the Father, they being with Him of one essence according to the flesh. But here human nature, inseparably and indissolubly united with Divinity, shone through—as a piece of metal placed in the midst of fire, glowing, itself beginning to emit light and warmth as if becoming fire, but without having transformed its earthly nature.

The Feast of the Transfiguration… It is hailed by the ancient holy fathers, and Russian preachers, and poets of the Silver Age, as it itself signifies the beginning of the Russian autumn. After all, it is not accidental that according also to Greek tradition, the people bring to the church earthly fruits, the first-fruits of the harvest. Priests sprinkle above all apples, pears, and grapes as was customary in the Peloponnese and in Cherson, reading special prayers for the faithful, supplicating the Lord God to illumine their hearts with the beams of knowledge of God, that their hearts would be filled with spiritual blessings, a symbol and material expression of which these are earthly fruits, as if speaking of an imperishable paradisaical life, to which we all are summoned through spiritual ascent up Mt. Tabor, through unification with Christ the Savior in the Sacrament of Communion. And indeed, dear friends, the Sacred Scriptures of the Old and New Testaments speak of the Feast of the Transfiguration, in regard to us as children of the Church, who the holy apostles call children of the light and sons of the Kingdom. They looked unto him, and were lightened: and their faces were not ashamed (Ps. 33:5). Taste, brothers and sisters, on the Day of Transfiguration, the All-Pure Body and Blood of our Savior from the holy Eucharistic cup. Taste and see that the Lord is good. And what will we see? People will see around us the light of the Heavenly Father, about which the Savior speaks so clearly and lucidly: “Let your light [the Taboric light—Fr. Artemy] so shine before men, that they may see your good works, the beauty of your soul and body illumined by the Holy Spirit, and glorify your Father Which is in heaven” (cf. Mt. 5:16).

On the day of the Transfiguration, like the apostles gentle, meek, and pure of heart, bearing Divine grace, flowing from the summit of Mt. Tabor, we begin to understand why the preeminent Apostle Paul call Christians “light,” beaming in this perverse world. The feast of the Transfiguration speaks to us of the joyous import of spiritual podvig. After all, the purpose and honor of the spiritual calling in Jesus Christ consists in nothing other than the acquisition of the grace of the Holy Spirit, in the willingness and ability to divulge the petals of your soul, embracing these Divine rays, the source of which is the ineffable Sun of Love, or Sun of Truth in the language of the Prophet Malachi—our Lord and God Jesus Christ.

Remember, dear friends, the circumstances of this marvelous and mysterious feast, to ascend to spiritual perception which is not so simple, but, of course, is possible if we, like little chicks, gather under the wings of our Mother the Church, and she through her hymnographers and song-writers: Kosmas Mauima, St. John Chrysostom, and St. John of Damascus—in troparia and hymns of the feast (it’s very necessary to very attentively listen, and not be looking around), having purified our perception, raises us to comprehension of the Taboric mystery. Give attention that three of the disciples followed relentlessly behind the Lord as he mounted this mountain. “And why didn’t they take Judas?” perhaps asks someone among us. And because, answer the interpreters of Holy Scripture, that red-bearded betrayer was quite lazy and pampering of the flesh. He longed to sit with the Messiah in His Kingdom, which, however, he imaged as purely earthly, but couldn’t find the time to arouse himself when the Lord, having knocked at the upper chamber where rested the apostles, called the heartiest to follow after Him. So we must to make even some effort, to labor even a little, that the 6th/19th of August would not turn out to be irrelevant to us, not turn out to be disappointing and unfulfilling, because without toil we won’t pull out any fish from the pond. 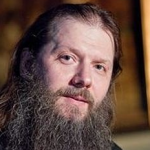 Fr. Artemy Vladimirov
Archpriest Artemy Vladimirov is rector of the Church of All Saints in Krasnoe Selo, Moscow. He is a mainstay of western Orthodox converts living in Moscow and visitors seeking a deeper spiritual life. His staunchly traditional beliefs, deep insight, warm humor, and willingness to reach out to souls from various backgrounds, has brought many people into the Orthodox faith.